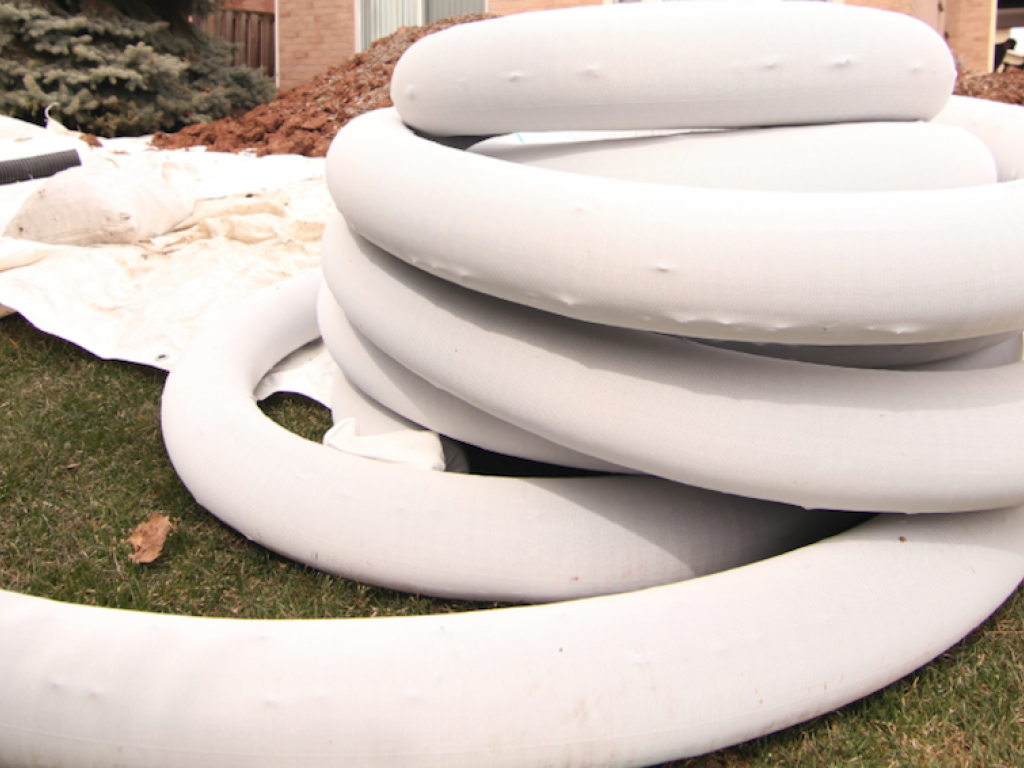 You found water in your basement. It’s not the first time but this time, there’s serious damage. What to do? You called a friend. They said, call the professionals, this isn’t something you can do yourself. You called the professionals and they are coming out but you didn’t quite understand what they meant by weeping tiles, sump pump, or storm drains. Here’s a primer.

A weeping tile has a number of different names including drain or perimeter tile, and French drain — named after the inventor of a complete system in 1859, Henry Flagg French. The tiles were originally made of terracotta and used in farmer fields to help drain away excess water. Modern weeping tile systems are constructed from corrugated plastic pipes with slits or holes.

The idea of laying in a weeping tile system is to allow for drainage at the foundation of your home. Slanted to encourage water to flow away from the house and toward the sewer system, a weeping tile draws water away from the house. Water that collects at the base of your foundation’s masonry can freeze in winter and cause small cracks to appear. Those cracks allow water to enter your basement and not only that, they grow. Your foundation is designed to provide a solid base for your home and your need to keep water from eroding it.

If you have it installed outside, you need to have a trench dug around the perimeter of your home. It will be slanted and go down as far as the footing of your foundation. Gravel will be laid in the bottom of the trench to encourage drainage and the weeping tile pipe placed on top of it. Constructed of a plastic polymer (PVC), the whole pipe will have a fabric sock to avoid soil or other debris clogging up the holes or slits. The pipe will drain away from your home and toward to the municipal sewer system. Make sure to deal with window wells too.

If the system is going to be installed inside your basement, the trench will be drilled in the floor, probably approximately a foot down, and once a level of gravel is laid, the weeping tile will drain into a sump pump to draw water out. Cement will be repaired over the trench to bring it up to level. A sump is a basin where water can collect in your basement — either from rain or water seeping in during a high water period. The liquid is usually drained away using a pump system that activates once the water has reached a certain level. Most modern sump pumps also include a battery back up in case the water situation is connected to a storm which has knocked out the electricity to your home.

Storm drains or storm sewers draw water way from paved streets and roads where rain water or melt-off can’t simply drain into the ground. They often also handle excess water from properties that drain out onto the roadways. Most municipalities do not allow direct connection from your downspout or weeping tile drainage system to the storm drains.

Not A DYI project

Your home may have already had a weeping tile drainage system but if it has become ineffective over because of time or damage, it may need to be replaced. New weeping tiles can last many years. Both an exterior or interior installation of a weeping tile system is an involved process and should really only be undertaken by professionals. It is likely you will be having your basement fully waterproofed at the same time as any weeping tile system being installed. Your contractor will ensure any cracks or fissures are repaired and your basement properly sealed as part of the waterproofing project. Your home will be protected from water damage caused by excess water from storms or severe winters.

When you research companies, look no further than Benchmark Waterproofing. A family-owned business with many years of experience in conducting basement waterproofing in the Greater Toronto Area and beyond. They will inspect your property, recommend the right waterproofing project for your home, use the most modern technology available, and return your basement to the solid foundation it should be. Their well trained and expert installers will treat your home and property like their own. They take pride in doing the job right the first time. It’s guaranteed.